Emmanuel Pulse and the DNA of Jamaican Folk Traditions Artist Cleo Lake devised work during the RWA's summer exhibition Jamaican Pulse which explored her own heritage and collaborated with members of the Jamaican community in Bristol. In this blog post, Cleo discusses her working process and her experience of working with two very different cultural groups.

‘Go Down Emmanuel Road gyal and bwoy fi go bruk rock stone…Bruk dem one by one, finger mash no cry, member play we a play.’

Popularised by Harry Belafonte, Emmanuel Road is a Jamaican folk song that I first remember hearing around eight years ago when a member of the elders dance group, the Caribbean Cruisers, suggested it as a group song. The song is accompanied by a game where a stone is passed around a circle and you lose if you drop the stone.

The song always gives me goosebumps. I wondered if it was a song sung by the Jamaican side of my family years gone by and long since gone - a song that was somehow in my DNA. I sensed a melancholy within the song not just from the thought of having your finger ‘mashed’ during the game but rather a reflection on the poverty that must have existed and to an extent still exists in Jamaica. Many people tend to have an idyllic picture of Jamaica, the island in the sun with its laid back vibe and Reggae music without necessarily stretching our minds to think of enslavement, plantation life, rebellion, uprisings, abolition, emancipation and the legacies of all of this. The reality of emancipation in 1838 was that many people were left destitute with nothing and the former enslaved workers were on the whole not allowed to occupy any land to farm on which included the abandoned plantations. Such spiteful unfairness and lack of concern for adequate provision led to one of the bloodiest episodes in Jamaica’s history, the Morant Bay Rebellion in 1865. Morant Bay, which I visited on my only trip to Jamaica in 2006, is in the Parish of St Thomas where my own father was born just seven decades after the bloody uprising.

When the opportunity to be involved in the outreach element of Jamaican Pulse presented itself, I decided I would set about producing a remix of the folk song. It was a real joy being able to work with the Caribbean Cruisers again who are also part of the Malcolm X Elders Forum. We spent two sessions singing, playing percussion with musician Richard Davis and dancing. This strand of the project also included a workshop at the RWA where the Caribbean Cruisers led dancing in the gallery amongst the art works, which everyone really enjoyed.

I was determined that the heart of the project was about introducing or reintroducing the younger musicians and people of Jamaican descent to the folk song. I was happy to work with Official Recordings (Wish, Gilly, Dash and Ellis) alongside music producer Kilaze and film maker SimzCity TV. I was surprised that most of the young musicians had never heard the folk song before.

During the project I saw a post on social media from a friend of mine with roots in Ghana and in particularly the Ga tribe of Accra. It was a clip of a group of people playing the same circle style game, passing the stone round the circle and singing a song with the same melody as Emmanuel Road. What a revelation that was and surely evidence of the deep African roots of Jamaican culture that survived across the Atlantic and which still live on today.

So now I am thinking that the song is in my DNA but from much further back than I had considered. 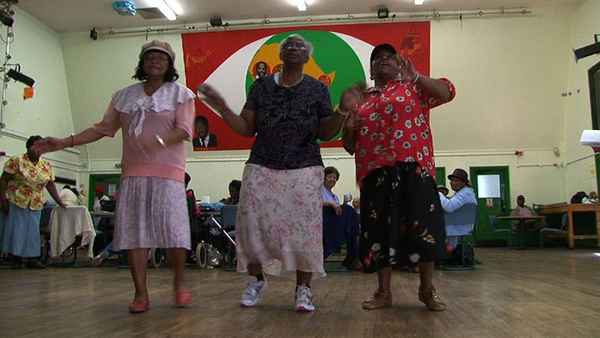 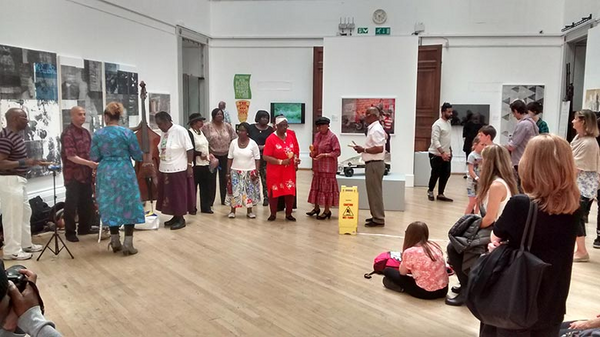