He has had a prolific exhibition record with solo exhibitions at the Plymouth Art Centre in 1955 a retrospective at the Plymouth City Art Gallery in 1972, thirteen shows at the New Grafton Gallery, two exhibitons at the Brian Sinfield Gallery, Burford , a solo show at the Bankside Gallery London in 1997 and a solo show in 1998 at the Everard Read Gallery Johannesburg.

He became the Official War Artist to Northern Ireland in 1973 and 1978 and between 1973 and 1980 worked with the British Army in Germany, Cyprus, Oman, Hong Kong, Nepal, Norway, Canada, Belize and Brunei. He has been the recipient of several awards including a prize at the John Moores Exhibition in Liverpool in 1978, a prize winner at the John Laing Competition in 1979 and he won first prize in the Hunting Group Awards in 1982. The following year he became the prize winner at the RWA. In 1986, he won the NEAC Centenary Award. His work is included in several key public collections such as Plymouth City Art Gallery, Sheffield Art Gallery, Imperial War Museum, Ulster Museum, National Army Museum and the guildhall Art Gallery amongst others.

He has been a member of the Royal Academy in London since 1984 and also became President of the NEAC in 1998. He has also served on the Council and several committees of the Royal Watercolour Society of which he is a member.

In discussing his work in the magazine 'International Artist' in June 2001 he noted:
'I was brought up in London surrounded by railway yards and factories. This has very much influenced the use of horizontal and vertical structures and lines in my work. I am not a landscape painter, but rather a vertical horizontal and linear painter, which is why I have a passion for the lines that occur within my studios, and include them in my paintings. When I study a model, I think of that figure not in rhythmical terms, but in vertical or horizontal positions and planes.' 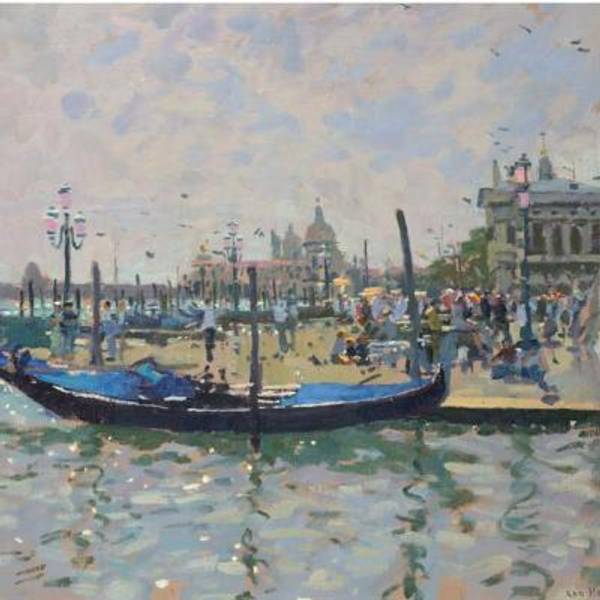